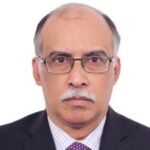 Ambassador Kamrul Ahsan joined the Bangladesh Embassy in Moscow on 5 January 2020 and presented his credentials to the President of the Russian Federation His Excellency Vladimir Putin on 5 February 2020.

Prior to his current assignment in Russia, he had been Secretary for Bilateral and Consular Affairs in the Ministry of Foreign Affairs of Bangladesh. He was promoted to the rank of Secretary on November 2016.

Ambassador Kamrul served as Bangladesh High Commissioner to Canada from 2012 to 2016. He was also concurrently accredited as his country’s Ambassador to Argentina, Cuba, Jamaica and Venezuela during that period. In Canada, he was the Dean of the Asia Pacific Diplomatic Group.

He was the High Commissioner of Bangladesh to Singapore from 2007 to 2012. He served as the Dean of the Diplomatic and Consular Corps in Singapore and was Senior Vice President of Club 200, a platform of resident Ambassadors and representative of corporate houses in Singapore.

Ambassador Kamrul, a career foreign service officer, served at different capacities at the Headquarters and Bangladesh Embassies abroad. He joined the Ministry of Foreign Affairs of Bangladesh in 1988. He served there as an Assistant Secretary from 1988 to 1992.

While at the Ministry of Foreign Affairs in Dhaka from 1999 to 2001, he was Director for South Asia and South Asian Association for Regional Cooperation (SAARC), Director (Personnel) and Director (Foreign Secretary’s Office).

From 2001 to 2003, Ambassador Kamrul Ahsan served at Bangladesh Embassy in Washington DC, United States initially as Counsellor (Political) and then Deputy Chief of the Mission.  He then served as Consul General in Dubai and Northern Emirates, United Arab Emirates from 2003 to 2007.

Ambassador Kamrul obtained his Bachelor of Science degree in Civil Engineering from Bangladesh University of Engineering and Technology (BUET) in 1984. After his graduation from BUET, he served as an Assistant Engineer from 1985 to 1988 at Engineering and Planning Consultants (EPC) Limited and Bangladesh Rural Electrification Board (REB) respectively.

He also studied at Beijing Language and Culture University, China and attended a course on security studies at Asia Pacific Center for Security Studies in Hawaii, USA.

He is a Life Fellow of the Institution of Engineers, Bangladesh (IEB). He has also served as a Member of the Board of Governors of the Bangladesh Institute of International and Strategic Studies (BIISS). He contributed to a book titled ‘Little Red Dot: Reflections Of Foreign Ambassadors On Singapore’, published by the Institute of Public Policy of Singapore.